Professor Natalie Coulter, in the Department of Communication Studies in the Faculty of Liberal Arts & Professional Studies (LA&PS), has been appointed the new director of the Institute for Research on Digital Learning (IRDL), an Organized Research Unit (ORU) at York University. Coulter’s appointment went into effect on Jan. 1. 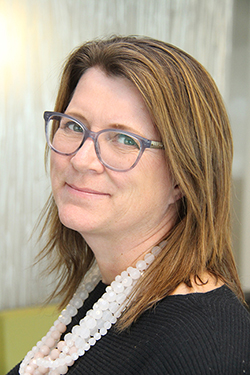 The centre has moved this year to co-leadership of the Faculty of Education and LA&PS, reflecting an expanded focus as Coulter steps into this leadership role.

IRDL has a broad mandate to engage in systematic inquiry, discussion and information sharing related to the uses of technology in teaching and learning by encouraging the formation of links with faculty members across the University and with schools, government, and industry to provide collaborative, multidisciplinary approaches to research problems and issues.

Originally established in 1987 within the Faculty of Education as the Centre for the Study of Computers in Education, the institute became a university-based research unit in June 2001 and was named IRLT at that time.
Coulter takes over from Professor Jen Jenson who was director of IRDL for more than six years. (Jenson is embarking on a new career at the University of British Columbia.)

“During my tenure at IRDL, I hope to expand IRDL’s mandate on digital learning to engage more broadly with digital cultures as informal sites of pedagogy and learning, and to produce research that responds quickly to changes in technology, media and culture,” Coulter says. She notes that IRDL will continue to promote research, scholarship, and pedagogic innovation in a digital age.

Coulter is an expert in the areas of digital culture, critical advertising studies, children’s media culture(s) and girls’ studies, with a special focus on the social construction of marketing niches such as the tween girl. She has recently published an edited collection with Communication Studies Professor Susan Driver titled Youth Mediations and Affective Relations (Palgrave Macmillan, 2018). Her book, Tweening the Girl:  The Crystallization of the Tween Market, was published by Peter Lang’s Mediated Youth Series in 2014.

She is a founding member of the Association for Research on the Cultures of Young People.

With funding from the Social Sciences and Humanities Research Council of Canada, she presently has two research projects underway – one on the embodied tween, living girlhood in global and digital spaces; and another on digital childhood and fandom.